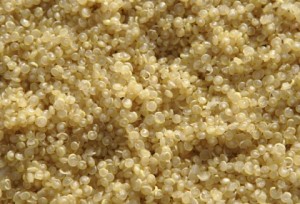 of Sciences as one of the best sources of protein – it’s one of the few plant proteins that contains all eight essential amino acids. Quinoa is also gluten free and has a low glycemic index.

I like quinoa because you can fix it for breakfast (hot quinoa with raisins, cinnamon, and milk), lunch (a plate of quinoa with black beans, salsa and cheese) or dinner (okay, haven’t eaten it much for dinner yet). I prepare a big batch in my larger thermos, eat some immediately, and put the rest in the fridge for later.

Our instructions will make more sense after you quickly read through our thermos cooking basics.

Timing (45 minutes) is approximate. It partly depends on how you like your quinoa cooked. Just give the thermos a shake every once in a while. It will slosh around at first, then it will slowly thicken until it barely moves at all. When this happens, it’s done.

You can always open the top and check inside once or twice until you get a feel for it. Remember that you can’t overcook it, so you don’t have worry about watching the thermos or emptying it when it’s done. Just leave it on the counter and eat it when you’re ready. You can even put it out the night before – convenient, isn’t it?

Learn about the nutritional value of quinoa.

I’ve Cooked Quinoa. Now What Do I Do with It?

The nice thing about quinoa is that it doesn’t have much of it’s own flavor so it will take on the flavor of what you cook it with. Here are a few more ideas of what to do with your cooked quinoa.